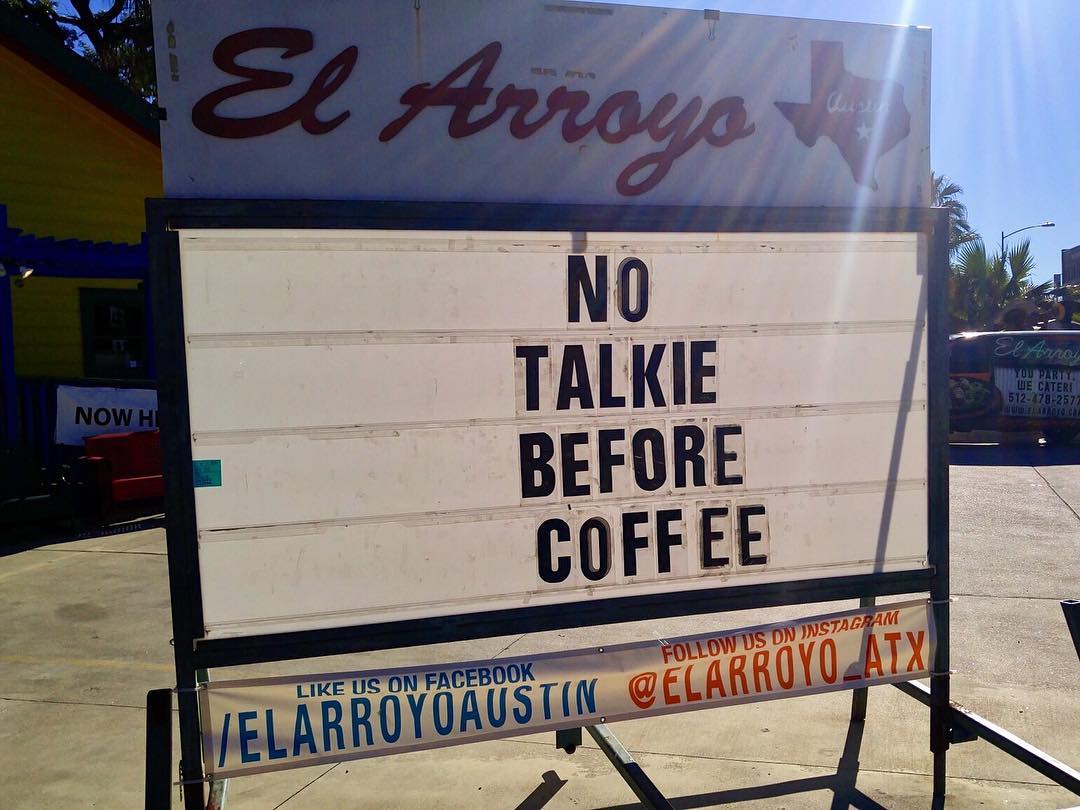 No Talkie Before Coffee – I feel you amigo.

This sign was stolen from El Arroyo’s Facebook Page. El Arroyo appears to be a Tex-Mex Restaurant located in Austin, Texas. I have never been there, but if you are on Facebook you may seen at least one of their witty signs in your feed (some of them went a bit viral during the recent presidential campaign).

I snagged this one, well because, Coffee and I can relate. I posted it today, cause… it seemed somewhat appropriate, I mean Taco Tuesday and all 🙂

I didn’t really steal the sign, just the image of the sign, from the El Arroyo’s Facebook Page. I don’t want the sign to come up missing and someone think “it was that fat hairy guy that blogs about coffee.”

Grab a cup of coffee and stop by El Arroyo’s Facebook Page to enjoy their signs. If you are in Austin Texas it might be worth stopping in for some Tex-Mex. If I ever make it down that way, I’ll stop in, it’s the least I can do for stealing their sign. 🙂

On another note… Tesla’s Five Man Acoustical Jam CD was the first CD I ever purchased with my own money (back in 1990 from the PX while in AIT at Fort Gordon, GA) . Great CD, I still have it, and it includes their version of Signs.

Good morning @coolsport00 @susangude @mattvogt @tscalzott Enjoying a cup of coffee while contemplating how to not do all the stuff I should do today. Last sunny day we are suppose to see for a bit here. Have a great day all! #vCoffee

Had a #VCOFFEE with Kae Woodland yesterday. Her Vegan Mother Sauces Cashumel are delicious!!! https://lnkd.in/g8k_hgDW

Lookie Lookie Matt Allen!
Immensely grateful to YOU for connecting me to Wendy S Wiseman through the magic of a proper DM ediquette for socail media INBOXES!!! We had the best #VCOFFEE this morning and enjoyed getting to know each (and her dog Max too!)…https://lnkd.in/g4R_YNjJ

Such a joy having a #VCOFFEE with you today Lynn Sanders

Such a joy having a #VCOFFEE with you today @LynnSanders https://lnkd.in/gn8Crqay

You can all come out now… I’ve had my coffee 🙂