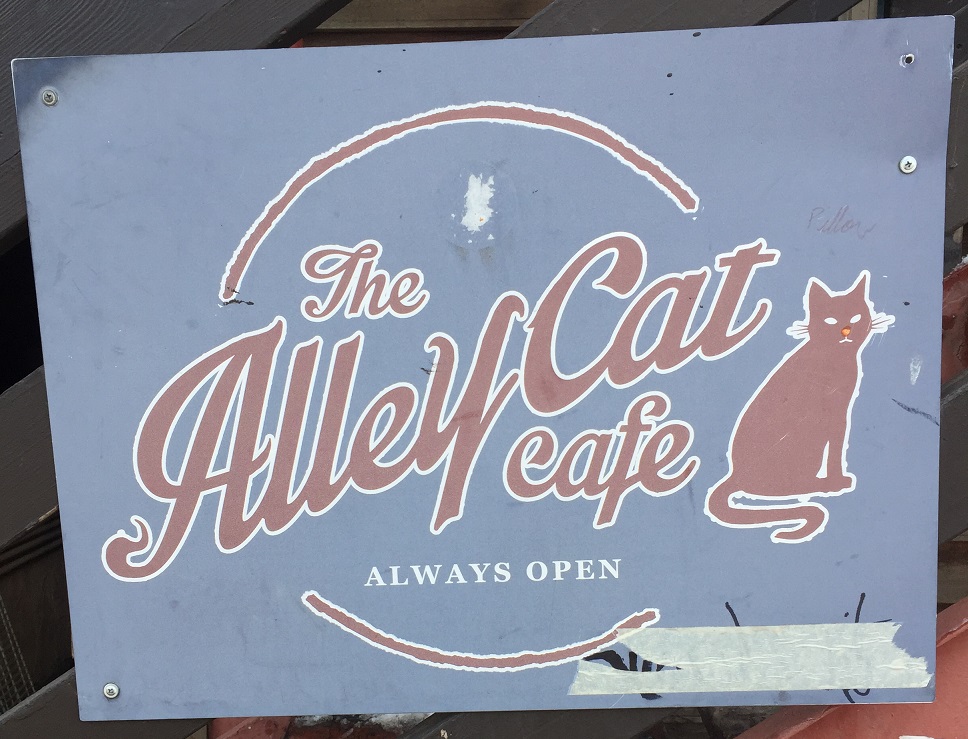 Sandy and I stumbled upon the Alleycat Coffee House while walking around the Colorado State University campus in Fort Collins, Colorado. It was a nice sunny day, a little cool. A train had stopped on the tracks running through town, the way west was blocked, and traffic was pretty snarled up. We were on foot, we had walked a couple miles, it was about lunch time, and I really needed a cup of coffee.

Down an alley named Wattel (I think that was it) there was a building we could see from where we were which had murals of people and cats enjoying coffee and smoking hookah. I thought I had taken a picture of the murals, but nothing on my phone 🙁

Cats and coffee, yes please. Looked like a great place to try and we were not disappointed (well maybe a little disappointed, as there were no actual cats). The Allycat Coffee House is on the second floor, and there is a hookah lounge downstairs in the same building. So the murals are accurate 🙂

The place was packed. We were able to snag a couple of seats at a table as someone was leaving. A local chess club was set up using the tables next to us to play chess. Lots of people reading, or working on their laptops, or just hanging out.

We ordered The Club Me which is a sandwich with freshly sliced turkey, bacon, swiss, fresh greens, tomato, pesto, and mayo. It was very good and more than enough for Sandy and I to split for lunch. The bread for the sandwich is baked in house. We opted for carrots and hummus as the side which was tasty as well. For coffee I ordered a pour over. I love pour overs and this one was really good. Sandy enjoyed a Chai latte.

The place was covered in art. The tiles on the ceiling where all painted and lots of works by local, I guess in some cases probably transient, artist on the walls. A drawing of a kitten in a coffee cup on the napkin box made me smile.

Allycat Cafe is open 24 hours. I bet it is an interesting place to visit for a cup of coffee in the middle of the night/early morning.

Wish we would have had time for another trip to Alleycat Cafe. I also wish I had taken a few more pictures – it was a neat place and I was just taking in, talking to Sandy, and enjoying our meal and coffee. Next time I hope. Might be worth stopping downstairs for a hookah as well.

Good morning @coolsport00 @susangude @mattvogt @tscalzott Enjoying a cup of coffee while contemplating how to not do all the stuff I should do today. Last sunny day we are suppose to see for a bit here. Have a great day all! #vCoffee

Had a #VCOFFEE with Kae Woodland yesterday. Her Vegan Mother Sauces Cashumel are delicious!!! https://lnkd.in/g8k_hgDW

Lookie Lookie Matt Allen!
Immensely grateful to YOU for connecting me to Wendy S Wiseman through the magic of a proper DM ediquette for socail media INBOXES!!! We had the best #VCOFFEE this morning and enjoyed getting to know each (and her dog Max too!)…https://lnkd.in/g4R_YNjJ

Such a joy having a #VCOFFEE with you today Lynn Sanders

Such a joy having a #VCOFFEE with you today @LynnSanders https://lnkd.in/gn8Crqay

You can all come out now… I’ve had my coffee 🙂